Will starting your own business make you happy?

Starting your own business can be a leap of faith, but freelance food photographer and stylist Jade Sarkhel says she’s never been happier: “It’s so much more satisfying if you know you’re building something for yourself. I’m now earning three or four times what I did in a full-time job and I’m working fewer hours.”

As an employee – first a hairdresser, then as a marketing executive for a beauty brand and subsequently a restaurant group – Sarkhel admits she was often left feeling unappreciated for the hours she was putting in. She turned her photography hobby into a business in December and is already hiring staff.

“What makes me happy at work now is variation,” she says. “And I can have longer periods of work and breaks in between when I want to.”

The number of self-employed people in the UK has increased by 45% since 2000, to 4.7 million workers in early 2016. In 2015, a survey by the Institute for Public Policy Research (IPPR) (pdf) found that since 2010, 40% of the rise in jobs in the UK has been self-employment, a change it said had sparked a debate about whether it was “as a sign of entrepreneurial spirit, innovation and future economic growth … [or] primarily indicative of a rise in precarious, insecure work”.

Happiness consultant Samantha Clarke believes the rise can partly be explained by the influx of a new generation who seek very different things from a career, compared with their predecessors. “For them happiness at work is essential – [the work] must be purposeful, the environment must be mindful to their needs and also motivating and nurturing for their desire to learn and grow,” she says. Plus technology just makes it easier to give it a try – “you can set up quite easily and effectively … you used to have to hire an expensive web designer”.

Trying to improve happiness at work has become big business in its own right. Prof Ivan Robertson, a business psychologist and co-founder of employee wellbeing company Robertson Cooper, says there’s now a much better understanding of what we want from work, and corporations are using that insight to try to retain talent. Remarkably it doesn’t all come down to money, once a minimum level is achieved. 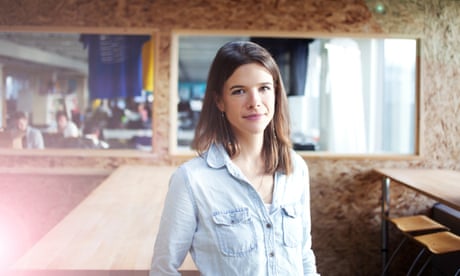 “Decades of research has identified three core things,” Robertson says. “One is control – that you have control over how you go about your work, including the place and time you do it, and how you work towards your objectives. The more freedom you have over that, the happier people tend to be. The second is resources. Do you have what you need to be able to carry out your job? And the third is support. When the resources aren’t there, or things get a bit much, is there support that kicks in?”

If those three factors are present, Robertson adds, employees are unlikely to feel stressed and unhappy at work. Elevating that to a state of happiness depends on there being a higher purpose to the task – “[it’s] a sense of meaningfulness, that what you’re doing actually makes a difference”.

For many, self-employment will tick those boxes. According to the latest research (pdf) from the Association of Independent Professionals and the Self-Employed (known as IPSE), more than four out of five (84%) people are very satisfied with working for themselves, citing a better work-life balance, increased earning potential and control over work as the main reasons. By contrast, a survey by HR professional body CIPD (pdf) found just 45% of employees felt satisfied at work.

But entrepreneurs who set up their own businesses to achieve happiness will need to consider the welfare of their staff as they grow. Jonathan Birch, co-founder and creative strategy director of Glass Digital, says his experience as an employee has directly affected his approach as an employer when it comes to promoting a supportive culture.

Indian businesses are sharpening their focus on responsible business practices, according to the 2017 Responsible Business Rankings of...

Sahara Group's massive luxury resort town Aamby Valley, which has been put up for auction by the Supreme Court, has found just a...

After announcing the launch of its packaged drinking water 'Divya Jal', Baba Ramdev's Patanjali Ayurved Ltd is expected to enter $70...