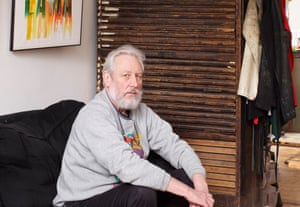 From the outside, it’s obvious this isn’t an ordinary home: three large, shop-style window panels showcase Kitching’s iconic prints – word-based images in big, bold type. A fourth is given over to local notices: jumble sales and student art shows. “That was Celia’s idea,” Kitching says. “She was more gregarious than me.” Celia Stothard, his late wife, bought the property 19 years ago. She chose it for its flexibility: a place for them to live and hold talks, exhibitions and performances. She was a designer and artist, too, as well as a jazz singer.

The building is a former alehouse in Kennington, south London, buttressed up against a courthouse (local folklore has it that Charlie Chaplin used to come here to fetch jugs of ale for his mother). Storage rooms cascade off the back of the ground floor, where Kitching runs the Typography Workshop, into a cellar crammed with his extensive, 19th-century type collection. Upstairs, a high-ceilinged mezzanine has a reading nook reachable only by the swivel of a library ladder.

Alan Kitching in his workshop.
Facebook Twitter Pinterest
Kitching in his workshop. Photograph: Suki Dhanda for the Guardian
The printing craft lends itself well to interior decoration. Plan chests double as tabletops. An old iron printing press (from Kitching’s apprenticeship) is as much machine as objet d’art. Wooden type blocks are simply pleasing to look at. And then there are the prints themselves: Kitching’s book and magazine covers, work for commercial and private clients, design competition pieces all adorn the walls.

Before the couple moved in, the building housed a mail-order fashion company. “The place was full of people packing T-shirts and frocks,” he says. “There were no cooking facilities. At first we lived very primitively.” Stothard’s studio was upstairs and Kitching’s downstairs, and they’d communicate via notes.

That work-focused ethos is reflected in the layout. Given the size of the house, the kitchen, bathroom and bedroom are tiny. “Most kitchens are too big,” Kitching says. “They’ve got the thing [island] in the middle, cupboards all over the place. I’ve been in houses where it looks well designed, but you have to walk around all the time.” His galley kitchen has utensils hanging from hooks, with all ingredients within two steps’ reach of a small worktop. “I like constrained living, because it frees you from having to think about it all too much.” He favours shallow cupboards, where everything’s on display. “It’s about utility, no fuss.”

His tiny kitchen.
Facebook Twitter Pinterest
The tiny kitchen. Photograph: Suki Dhanda for the Guardian
Kitching, now 75, grew up in a two-up, two-down in Darlington. On leaving school, he wanted to be a poster artist, but that was deemed “a bit odd” in the big railway town, so he took up the closest thing, an apprenticeship as a typesetter. Print jobs followed, and as a technician at Watford School of Art, he met the Modernist designer Anthony Froshaug, who became a mentor. In the 1970s, Kitching established himself as a graphic designer and lived with his first wife, Rita, in Richmond, where they brought up two sons. But Rita died young, from breast cancer, and after her death he moved the boys into central London and redirected his practice to making typographical art prints.

These days, he spends most of his time in his bright ground-floor studio. On the sills lies a sun-bleached “cabinet of curiosities”: two fossilised frogs, a mini boomerang, an Eiffel Tower figurine, all put there for passing children to gawk at. “Three- and four-year-olds stop and say, ‘Look at this! What’s that?’ I can hear them; they can’t see me. You hear all these conversations outside: people on their phones, coming out of the court having an argument.”

Celia passed away five years ago, aged 61, but she’s still everywhere in the house: prints by her, paintings of her, newspaper cuttings she stuck on the wall. And, while Kitching enjoys his own company, he says he’d rather have someone with him. “We’d always meet for coffee at 11 and have dinner together.” He recently had in some schoolchildren to create a mural for the Southbank. “Celia would have been beside herself: it was the perfect project for what she was trying to do with this place. In a way, I’m trying to fulfil her wishes.”

Does he see himself growing older here? “I couldn’t leave London,” he says. “I’ve got so used to the convenience. I like to be in close contact, if you like.” And in this house? “Everything I need is here. Plus, everywhere else I’ve lived has been conventional and I wouldn’t want to go back to that life – you know, carpets and Hoovers.” He laughs. “Work comes first, living comes second. I haven’t got time for vacuuming.”

Change in neighbourhood The estate agents used to be very low-key.

Interior design hero Norman Potter: he had an honest, minimal approach to design, always conditioned by the space.

Biggest extravagance The Wrington Collection of theatrical type that we bought from an old printers’ in Somerset.

Most treasured possessions A wooden pencil box my father made for me; and a picture of Celia sitting in our studio.

One thing you would change I’d add a veranda because there’s no garden. But I think it’s too late now.

• Alan Kitching Special Edition: A Life In Letterpress is published by Laurence King on 7 April. An exhibition runs at Somerset House, London WC1, from 21 April-2 May, as part of its Pick Me Up festival.