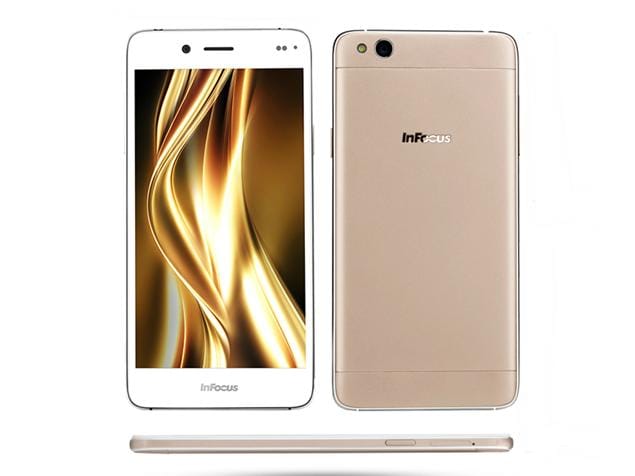 After listing it on its company website last week, InFocus has now launched the Bingo 50+ smartphone in India. The smartphone is available exclusively on Amazon India, and is priced at Rs. 7,999.

Last week, InFocus listed the Bingo 50+ on its website, but the pricing availability details remained a mystery. Now, the smartphone has officially gone on sale on Amazon India. It is available in Silver and Gold colour variants, and InFocus is offering one year manufacturer warranty for the smartphone, and six months warranty for in-box accessories including batteries.

Judging by the name, the Bingo 50+ is an upgrade to the InFocus Bingo 50 that was launched earlier this year. The InFocus Bingo 50+ not only sees upgrades in the specifications department, but is also seen sporting a full metal body. The predecessor Bingo 50 (Read our review here) had options of fake leather or sandpaper finishes for the rear cover panel, and metal was only found on the sides.

As for specifications, the InFocus Bingo 50+ runs on Android 6.0 Marshmallow-based Infinite UI 2.0 OS, and supports a hybrid dual-SIM (Nano + Nano) slot. It features a 5.5-inch HD (720×1280 pixels) display, and is powered by a 1.3GHz MediaTek MT6753 quad-core processor paired with 3GB of RAM. It offers 16GB of inbuilt storage, with the option to expand via microSD card (up to 64GB).

The InFocus Bingo 50+ sports a 13-megapixel rear camera with f/2.2 aperture, autofocus, HDR mode, and full-HD video recording. There is also an 8-megapixel selfie camera on board. It packs a 2600mAh battery that claims to last up to 12 hours of talk time, and 480 hours of standby time. The company claims that the InFocus Bingo 50+ can play music for 58 hours on single charge, and play video for 6.9 hours continuously.

HIGHLIGHTS
The leaks show no sign of the Smart Connector.
The iPhone 7 to sport a new arch-shaped camera.
Apple has ordered for around 72 to 78 million iPhone 7 devices this year.
Leaks surrounding the iPhone 7 have picked up pace, and now several reports and images of Apple’s upcoming smartphone have surfaced online revealing more crucial details.

What is claimed to be the actual rear panel of the iPhone 7 is seen in photos, revealing design tweaks. The Weibo image, retrieved by 9to5Mac, reiterates previous reports, and shows that the antenna bands are shifted to the top and bottom edges. The camera lens continues to protrude, but seems to be a bit closer to the sides. The lens is more arched-shape with smooth edges, and a protective circumference around it. Even though the camera continues to jut out, the design is tweaked so that the lens stays protected even without a rear casing.

iphone 7_leak_baidu.jpg
Apple is also said to be very optimistic about its upcoming iPhone devices, and has ordered for a large number to be produced. Economic Daily News reports that Apple has asked its manufacturers Foxconn and Pegatron to produce as many as 72 to 78 million devices this year. There have been reports of slow growth in sales in the past year, but it looks like the company is betting big with the iPhone 7.

The iPhone 7 is expected to launch in three variants – iPhone 7, iPhone 7 Plus, iPhone 7 Pro/Plus Premium. It should come with Apple’s new A10 processor, and run iOS 10. The larger variant is expected to see a bump in RAM to 3GB to support the dual camera setup, while it is expected to come with a possible 256GB option. There have also long been rumours for the removal of the 3.5mm headphone jack in this generation.

According to a Bloomberg report, Apple has already planned for mass production of Oled displays for next year’s iPhone. Applied Materials hinted at these huge demands, and said that there has been a fourfold increase in orders. Notably, Apple has also been rumoured to switch to an all-glass enclosure with the iPhone 7s aka iPhone 8,
Download the Gadgets 360 app for Android and iOS to stay up to date with the latest tech news, product reviews, and exclusive deals on the popular mobiles.