A teardown video of the LG G5 has surfaced on YouTube claiming that the smartphone, which at launched was marketed as an “all-metal” phone, may pack more plastic than actual metal.

YouTuber JerryRigEverything posted a video of an LG G5 teardown where he took apart the smartphone. While he found that the LG G5 scored well in terms of repairability, on checking the build discovered that the handset sported a thin layer of metal (aluminium) which was supplemented by a thick plastic layer. The YouTuber took a knife to shave away the back to reveal only pure plastic until he reached deep inside the phone.

The LG G5 has already wowed critics and users alike with its innovative removable battery and modular design, the surprising ans deceptive plastic layering however may become a deal breaker for some users considering there are plenty of all-metal phones available in the market.As we mentioned earlier, according to JerryRigEverything, the LG G5 scores well in repairability. “If you break the screen on your LG G5 smart phone, it is actually pretty simple to disassemble and replace. There is no glue or sealed parts that need special tools to remove,” he said.

To recall, LG’s flagship G5 went on sale in South Korea starting Thursday while users in the US could grab the handset starting Friday. LG had confirmed that it would launch the G5 flagship smartphone in India in the next quarter.

The biggest highlight of the new LG G5 flagship is the modules or add-ons called the LG Friends, meant to signify the companion devices that can be attached to the G5. LG Cam Plus is a camera module that adds physical buttons for camera operations along with expanding the total battery capacity to 4000mAh. The Hi-Fi Plus module, co-developed by Bang & Olufsen, is a portable Hi-Fi DAC which can be used as a standalone portable DAC or with the G5 to enable 32-bit audio playback. The South Korean company can also be expected to showcase the companion devices in India with the LG G5 including LG 360 VR, LG 360 CAM, LG Rolling Bot, LG Tone Platinum, H3 by B&O Play, LG Smart Controller, and LG Friends Manager. 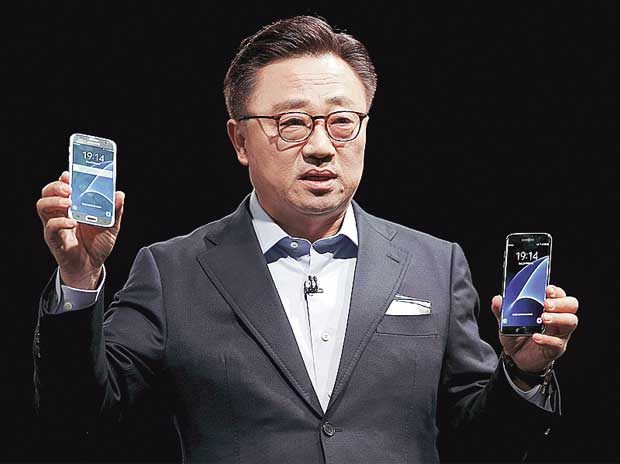 In a bid to recapture market share, Samsung launched two new versions of its Galaxy S smartphone and brought in Facebook Inc Chief Executive Mark Zuckerberg for a surprise appearance to tout the potential of virtual reality, prompting hundreds of people to rush to the stage to record the moment.

LG, which lost money from its mobile business last year as its flagship products struggled, introduced a modular design to its new G5 smartphones that allows users to replace or upgrade functions such as camera and audio independently.

It also launched a virtual reality headset and accessories including a drone controller to pair with the G5.

Analysts and investors cheered LG’s features, which they said were different enough to possibly revive sales, but were lukewarm about Samsung’s offerings, saying they only featured incremental upgrades.

“I think it’s possible for LG’s mobile business to recover on its new product launch, since they delivered significant changes with the G5,” said Seoul-based HDC Asset Management fund manager Park Jung-hoon. “The Galaxy S7, however, doesn’t seem to be creating as much buzz.” Samsung shares were down 1.3 per cent as of 0212 GMT, underperforming a 0.2 per cent fall for the broader market, while LG shares were up 3 per cent.

Revamps could prove key to smartphone makers as 2016 shapes up to be another tough year: Researcher TrendForce expects the smartphone market growth to slow to 8.1 per cent from 10.3 per cent a year earlier.

Margin pressures are also expected to intensify for the industry as Chinese manufacturers seek to expand overseas to counter slowing domestic demand.

Samsung on Saturday said its mobile payments service, Samsung Pay, will launch in China in March, a month after Apple launched its Apple Pay service in the world’s biggest smartphone market.

The company fell out of the top five in the world’s top smartphone market last year but hopes that its easy-to-use payments service will help it regain sales momentum.

“The challenge you have got in the smartphone market is breaking through all that sameness. From a design and functionality perspective, everything looks and feels the same,” said Bob O’Donnell, president of Technalysis Research. “So the challenge is finding things that stick out.”