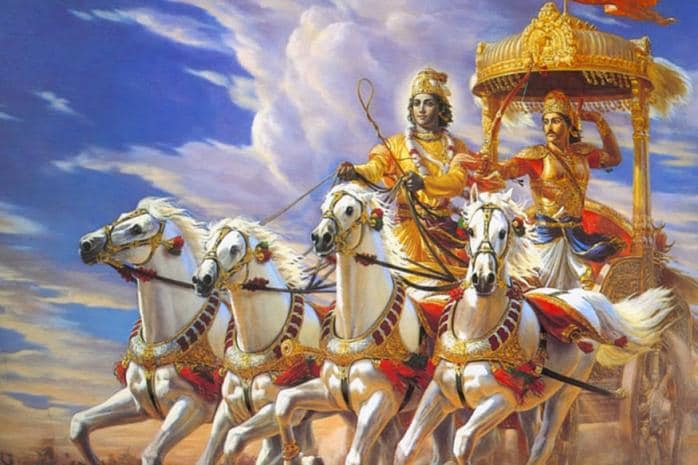 Krishna Janmashtami celebrates the divine birth of Lord Krishna. Raised in Vrindavan, he would in his early youth save Earth and its inhabitants from the evils of his maternal uncle King Kansa and subsequently become a pivotal character in the Hindu epic Mahabharata.

Standing at the brink of the Kurukshetra war between the righteous Pandavas and the evil Kauravas, Arjuna is filled with a moral dilemma about the violence the great Dharma Yuddha will cause, leading to the demise of many of his own kinsmen.

At that juncture, the mighty warrior wonders if he should renounce the path of war and seeks counsel from the Blue God, Krishna, who incidentally is his charioteer in the war. Krishna’s answer and discourse is the 700-verse Sanskrit scripture the Bhagavad Gita that cover a range of topics including the spiritual, the ethical, and philosophical and life in general, presenting a synthesis on the ideas of dharma, bhakti and yogic ideals of moksha.

As devotees around the world gear up to celebrate Krishna Janmashtami, here’s looking at some of the most inspirational quotes from the theological text.

The actions of a great man are an inspiration for others. Whatever he does becomes a standard for others to follow.

As the kindled fire consumes the fuel, so in the flame of wisdom the embers of action are burnt to ashes.

Strive constantly to serve the welfare of the world; by devotion to selfless work one attains the supreme goal of life. Do your work with the welfare of others always in mind.

Man is made by his belief. As he believes, so he is.

Let the motive be in the deed and not in the event. Be not one whose motive for action is the hope of reward.

One who has control over the mind is tranquil in heat and cold, in pleasure and pain, and in honor and dishonor; and is ever steadfast with the Supreme Self.

There is more happiness in doing one’s own (path) without excellence than in doing another’s (path) well.