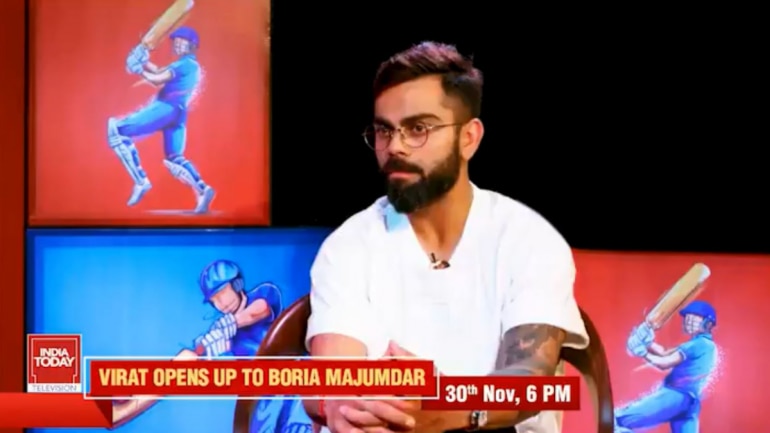 India cricket team captain Virat Kohli will set the ball rolling at ‘India Today Inspiration’ — a series of conversations with some of India’s biggest sporting legends.

What it takes to be a champion? How do these champions deal with failures? How did they make it to the top? What do they do when they are not on the field? How do they unwind? The superstars of Indian sports are going to be giving a sneak peek of their success mantra in the upcoming episodes of India Today’s brand new series, Inspiration.

In the 1st episode which will be aired on November 30 at 6 pm IST will have Virat Kohli having candid chat with India Today Consulting Editor, Sports, Boria Majumdar.

If the teasers that are going viral on social media are anything to by, the opening episode featuring Virat Kohli is going to be a firecracker.

From his ability to deal with failures to being thankful for the shampoo commercial with Bollywood actor and wife Anushka Sharma, Kohli has opened up about some of the most important aspects of his life and cricketing career.

Speaking about his unquenchable thirst to excel and contribute to the team’s success, Virat Kohli said: “I hate losing. I don’t want to walk out and say I could have done this. When I step out on the field, it’s a privilege. When I walk out, I want to have zero energy. We want to leave behind a legacy that future cricketers will say we want to play like that.”

How did he meet Anushka Sharma? What did he like the most about the Bollywood actor during the initial days of their relationship? The answers are all going to be out on November 30 on India Today.

“The thing that fascinated me the most was how relaxed and chilled out for what she already was at the stage. She was welcoming and comforting. These are things that helped us become really friendly,” Virat Kohli told India Today.

“We started cracking jokes. I was the one who was fooling around all the time. Some of the jokes were really silly but that’s how I am. I love having a good time and having a laugh. I am really glad that shampoo commercial happened.”

The World Cup 2019 semi-final exit was one of the most heartbreaking moments in what has been an interesting phase of Indian cricket under Virat Kohli. What was going through during the tense final against New Zealand?

“Do I get affected by failures. Yes, I do. Everyone does. At the end of the day, I know my team would need me. I had the feeling so strong in my heart that I am going to come not out and make India go through that tough phase [in the semi-final]. But then again, maybe that was I my ego talking because how can you predict something like that? You can only have a strong feeling or maybe it was a strong desire to do something like that.”

The 1st episode of India Today Inspiration featuring Virat Kohli will be telecasted at 6 pm on Saturday, November 30 on India Today TV. You can catch it again on December 1 at 2 pm and 10 pm. You can also watch the episode online at https://www.indiatoday.in/livetv.