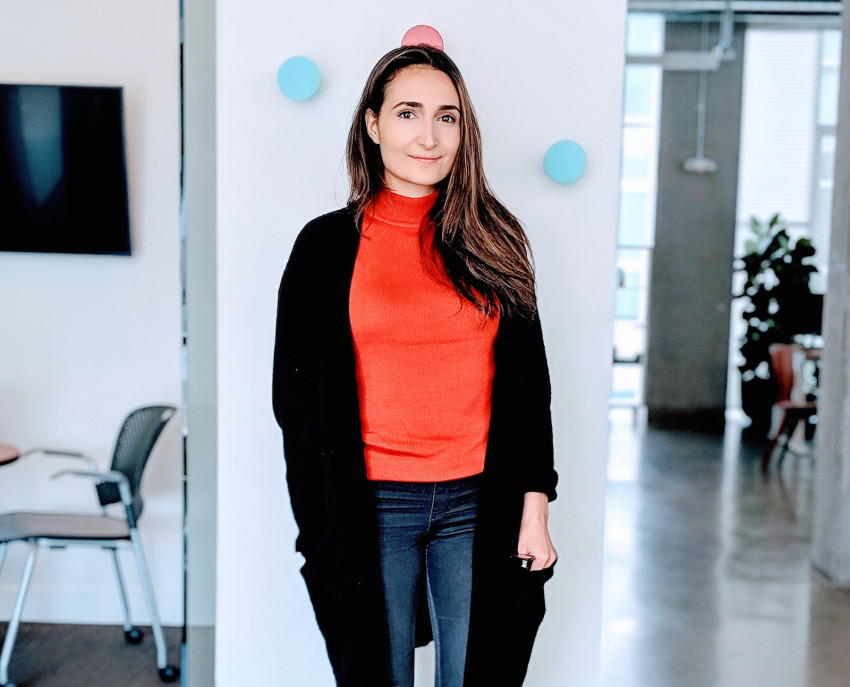 When Tania Abedian Coke was in college, her mother called her out of the blue to offer words

of encouragement: “You know, you can be a CEO. I just want you to know that,” her mother said.

Coke, who recalls growing up in a family environment that was always supportive, was taken aback by those words. And yet, years later, they have proven prophetic.

Today, she is the CEO and co-founder of Tellus You Care Inc. (Tellus), a healthcare startup with offices in San Francisco and Tokyo.

The company’s patented healthcare technology—a radar-enabled system powered by artificial intelligence (AI)—remotely monitors the health status of someone in a specified room, such as an elderly person in a care home.

The palm-sized, non-contact device can be attached to a wall. With precision and sensitivity, it detects a person’s heart rate, breathing, and movement. The device can tell if a person is walking, falling, or sleeping.

Such capability is important for healthcare professionals or relatives caring for a senior, allowing them to keep tabs on those in their care in a dignified, efficient, and effective way.

Starting a company and becoming a CEO were not always goals for Coke. In university, for example, she entertained the idea of becoming a doctor. But, looking back to her early career, it’s clear that she was never averse to taking on challenges and risk—even if they were calculated ones.

At first, Coke worked in strategy for a FinTech company in New York, then pivoted to product development in a global tech company in San Francisco. Not long after, she transitioned to graduate school before co-founding Tellus.

Why did Coke ultimately choose the startup life? The answer, in part, can be traced back to her formative years and growing up in a close-knit family.

“I grew up in a really beautiful area—a woodsy, nature wonder­land. Close to where I grew up is something called Walden Pond,” she told The ACCJ Journal.

The pond—a historical landmark and protected area in Concord, Massachusetts—is the subject of writer Henry David Thoreau’s eponymously named “Walden; or, Life in the Woods.”

It was perhaps that bucolic environment, rich in flora and fauna, that led to her initial fascination with biology, her major in college.

Equally important, Coke recalls a time growing up in a home where family life loomed large—in particular the presence of her elderly grandmother.

“I think having the influence of my grandmother living with us from a young age, and then helping my family manage her care, was really big. It was something that was very much a part of my life.”

Is that to say a straight line can be drawn from Coke’s care for her ailing grandmother to creating Tellus? Not really.

Her career took a winding path, adding critical elements along the way—such as an appreciation of technology and its application to solve real-world issues.

It was, in part, her discussions with Kevin Hsu about the care of elderly relatives that fermented her decision to create a healthcare startup. Hsu is a co-founder and chief technology officer at Tellus.

The pair met in 2015 while attending graduate school at Stanford University. At the time, Coke was researching mana­gement science and engineering and Hsu was studying electrical engineering.

“I was thinking about working in venture capital,” Coke confesses. “Then Kevin and I had this discussion where we shared ideas about our aging grandparents.”

It was in 2017—the pair having had similar discussions from time to time while at Stanford—when Coke had her “aha moment.”

Some seven years earlier, Coke was graduating with a major in biology. But, even then, she had taken courses in math and computer science.

So, it made sense that, when she began work, the first steps would be at Capital IQ, a FinTech company on the East Coast, and then at tech giant Google LLC in California.

Looking back, she found that both experiences were instructional and heightened one of her passions: technology.

However, Coke felt there was something missing. How could she connect technology with her other passion: healthcare.

“I worked for a FinTech company in New York and a tech company in San Francisco, so I was getting closer to tech­nology. But I studied biology in my undergrad years, and I was always inte­rested in the intersection of health and technology.”

To bridge those fields, Coke felt it necessary to go back to school. So, she left the comfort of Google to attend Stanford.

There was much uncertainty about the move. “I took the time at Stanford to explore, and I didn’t know exactly what that would lead to,” she recalls. “Maybe I would become a venture capitalist investing in health or technology. I didn’t know exactly that I would start a company. But I knew that I wanted to work on something health related. That was important to me.”

Tellus’s radar-based, non-contact device can sense the fine movements of a person in a room—including movements that suggest increasing or declining health.

“With our device, we can understand if a fall has happened in the room, or if someone’s movements are improving, which is quite important for aging and elder care,” Coke explained.

Such information is used to train the device’s patented AI and machine learning algorithms, thereby creating a rich profile of an individual that can be used by caregivers to monitor and predict the health of those in their charge.

In the future, such data may also become the basis for advan­cements in healthcare and medicine, especially—but not limited to—the treatment and care of seniors, Coke added.

So far, the company has designed the software and hardware at the core of their smart device. They have also conducted testing, including at care facilities in Kobe City.

Focusing initially on a business-to-business software-as-a-service marketing model, Tellus is forming partnerships with companies in the caregiving sector, including real estate developers and healthcare providers.

Thinking about her burgeoning career, Coke is grateful to a number of people who have supported her along the way.

In addition to her family and co-founder, she is thankful to the people who stepped up at key moments in her life—including investors, teachers, and mentors.

“I met Phil Libin when I was a teacher’s assistant at Stanford for a class called entrepreneurial finance,” Coke said.

A serial entrepreneur and venture capitalist, Libin was the CEO of software developer Evernote Corporation and a general partner at venture capital company General Catalyst. In 2017, he co-founded All Turtles.

“In January 2018, I went to an event where I reconnected with Phil. I saw him give a talk. After, I said to him: ‘Remember me from six months ago? I actually started a company. Can we chat about it?’”

All Turtles is not only an investor in Tellus, it is a strategic partner providing key resources, including office space, support staff, and a vital network of partners.

Seshadri manages Stanford Venture Studio, a hub for startups; Roizen is a venture capitalist and lecturer; and Seelig is a pro­fessor and director.

When Coke and her co-founder graduated from Stanford, they joined Seshadri’s summer program to work on their technology and develop their idea.

Before that, Coke was part of the Threshold Ventures Fellows program (formerly the DFJ Entrepreneurial Leadership Fellowship). Run by Roizen and Seelig, the program provides one-on-one training in entrepreneurship for a select group of graduate students at Stanford.

“Tina and Heidi are two women who I really look up to. There are others, but that timing, when people entered my life and said, ‘I believe in you; you can do it,’ was important.”

As we conclude our talk, Coke returns to family and thoughts of her grandmother. “I remember when my mom called me and said, ‘You know, your grandmother fell, and she’s okay. But I just wanted to let you know I had to help her up.’”

Calls like that, Coke says, became more frequent with time. That’s why she created Tellus: to solve such concerns, not just for her own family, but for families around the world.

A Poet’s Meditations on Inspiration and Hope

A poem arrives like a hand in the dark. Who knows where inspiration comes from, and where it goes. I submit that even artists don’t...