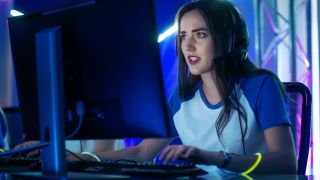 Welcome to our pick of the best multiplayer PC games of 2019.  If videogames are defined by competition, then there’s nothing more gamey than drawing your controller from its holster and taking on other players.

Whether you’re rubbing shoulders with your frenemies on the couch or taking on the world, the best multiplayer PC games are the perfect way to satiate that thirst for competition, because there’s no victory sweeter than that over another human being.

If you’d rather play together than against each other, then check out our pick of the best co-op PC games of 2019. We also have the best single player PC games and the best PC games overall.

Here are the best multiplayer games to have graced the PC platform in recent years.

The debate about the best Battlefield game of all time will never end, but Battlefield 1 certainly strikes a strong balance of spectacular visuals, modern mechanics, and sprawling maps from the rarely charted battlefields of World War I.

It’s arguably better than its successor, Battlefield V, thanks to a slightly slower, more methodical pace and the bold way in which it exaggerates the almost-steampunk chaos of WWI. There are gas grenades, bayonet charges, formidable special units like flame troopers, and of course Behemoths – menacing vehicles that come in to balance out a battle if it’s too one-sided.

Battlefield 1 is quite possibly the most atmospheric and spectacular online shooter ever made.

The blisteringly fast-paced toy-car-football phenomenon powers on, as popular today as ever. If you’re worried that it’s a bit too reminiscent of actual football, then work through that worry, because it’s so much more.

The beauty of Rocket League is in its absolute subservience to physics. Ball control is completely manual, team moves require a high level of communication and coordination, and aerial play is a whole higher layer of game to master.

Competitive play is divided up into leagues and seasons too, ensuring that whether you’re playing 1-v-1 or 3-v-3, you tend to be matched up fairly.

It may be more of a lifestyle choice and esport rather than a mere game – both insanely popular yet weirdly niche – but Dota 2 is a shining showcase of the MOBA at its finest. Get past the tough learning curve, and you’re in for a world of meticulously balanced heroes and 5-v-5 arena combat.

The aim is simple: destroy the enemy team’s ‘Ancient’ – essentially their base – using your heroes and a steady stream of ‘creeps’ that move towards the enemy base via three lanes. Think real-time strategy meets hack-n-slash. It’s deep, tactical, and free to play.

After all these years, the simple charms of firing pinpoint pixel arrows at other people on a single screen remain just as compelling. Towerfall sees up to four players with a limited supply of arrows attempting to one-shot each other.

It’s accessible, but with plenty of clever tricks, such as a wraparound screen that lets you run and fire arrows between the left and right, and top and bottom of the screen. There’s also the ever-vital dodge button, with which you can catch inbound arrows and fire them right back into the silly face of your attackers.

To spice things up, you can experiment with the endless mashups of mutators – from non-homing arrows to angel wings and an ever-scrolling screen – which help keep the game fresh and surprising.

The garish hero-based shooter hit the ground at hyper-speed and never really stopped. With one of the most vibrant and varied character rosters ever seen in a game, you have a huge amount of freedom about how to play – whether it’s as a tanky hamster scampering around in a four-legged mech, or an angelic, airborne healer.

Overwatch manages to condense a lot of fun into snappy team-based game modes, making it viable for both lunch breaks or all-night blowouts. Despite the asymmetry of its characters, it’s brilliantly balanced, with just about every hero feeling both rewarding and distinctive to play as.

Fans of the unforgiving tactical shooter series bemoaned its move into the multiplayer space, but none could have predicted the runaway success it’d become. Two teams of five face off against each other in attackers versus defenders games of bomb defusal, hostage rescues and asset protection.

The hook is that levels are partially destructible, and there’s a lengthy preparation phase during which defenders can build up their defences while attackers survey the map. No two games feel the same, and as you gain ‘Renown’ points, you can unlock new operators, each with distinctive abilities and play styles.

It sometimes seems like there are a thousand variants of the classic invertebrate tactics game you can play today. The most recent iteration is Worms W.M.D, which has a bold new art style and weapons, but if you prefer a more vintage feel then Worms Reloaded or even Worms Armageddon could be for you, while 2012’s Worms Revolution dabbles in 3D graphics on a 2D plane.

Whichever you go for, the formula remains a zenith of multiplayer gaming. Up to four players control a team of worms each, taking turns on a timer to cross precarious levels and decimate enemy teams with bazookas, explosive sheep, banana bombs and cheeky melee punches. A bit like Chess, Worms is both ancient and eternal.