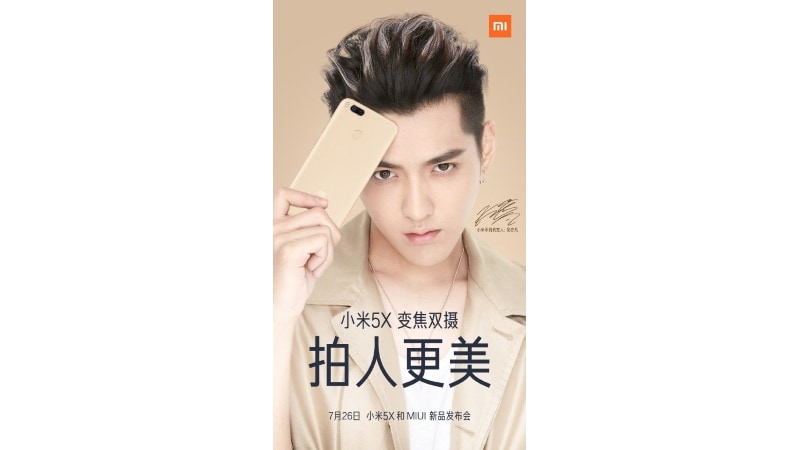 Xiaomi will launch the Mi 5X, another variant for its successful Mi 5 smartphone after the Xiaomi Mi 5c, on July 26. The smartphone was leaked earlier this week in a multitude of promotional images, revealing its design, features, and specifications in abundance. Now, the Xiaomi has confirmed that the Xiaomi Mi 5X will be unveiled at an event slated to be held in China. Besides, the smartphone will come with Android 7.0 Nougat-based MIUI 9, which was earlier confirmed by the company to be released before August 16.

The Xiaomi Mi 5X will be unveiled on July 26, according to a teaser posted by Xiaomi on its Weibo account. The teaser contains an image showing actor Kris Wu holding the device that has a dual rear camera setup along with a dual-LED flash module, and at the centre sits the fingerprint scanner. According to the previous leaks, the Xiaomi Mi 5X is alleged to sport a 5.5-inch full-HD (1080×1920 pixels) display. It is said to be powered by the Snapdragon 625 SoC paired with 4GB of RAM. On the design part, it is likely to ape the iPhone 7 Plus and come in Black, Gold, and Rose Gold colour options.

As we mentioned, the Xiaomi Mi 5X will launch with MIUI 9 out-of-the-box. The MIUI 9 is Xiaomi’s next mobile OS iteration that will come with a design overhaul and Android Nougat. Xiaomi recently enlisted the number of devices that will be getting MIUI 9, which is slated to arrive by August 16. Talking about the pricing, the Xiaomi Mi 5X is rumoured to cost around CNY 1,999 or roughly Rs. 19,000.

LG Q6+ was launched in India on Wednesday. The launch of the Q6+ follows on the heels of the LG Q6 launch last month. The Q6 series...

LG's V30 smartphone has finally started shipping to different markets. The company on Wednesday confirmed that the LG V30 smartphone...

Intex has launched a new budget smartphone, called Aqua Lions 2, which interestingly comes after the launch of the Aqua Lions...

The Flipkart Big Billion Days sale started on Wednesday with huge discounts on a wide range of products, especially electronics. The...