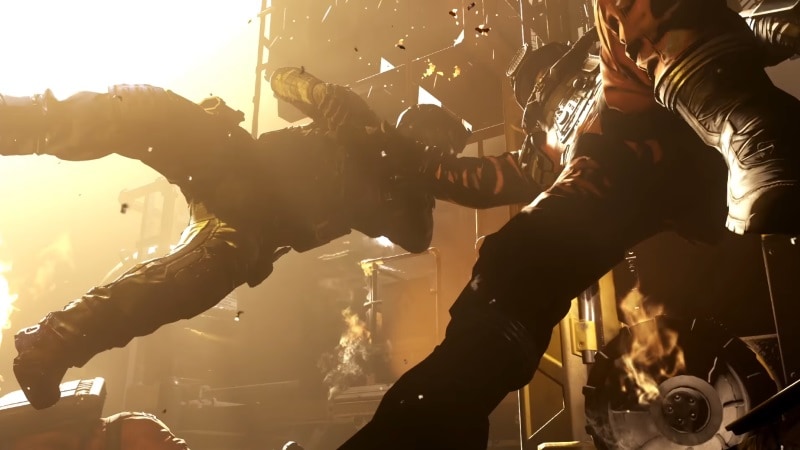 Call of Duty: Infinite Warfare Now Available Worldwide for Windows, PS4, and Xbox One
HIGHLIGHTS
Game available in retail stores as well as for digital download
Available on PC, PS4, and Xbox One
Gameplay trailer received flak on YouTube
Call of Duty is one of those game franchises that churns out annual editions of its game but still captivates the interest of video-game enthusiasts around the world with its releases. Now, the series has come up with its latest entry – Call of Duty: Infinite Warfare, which is now available for retail worldwide in stores as well as digitally.

The game has been released on Windows PC, PS4, and Xbox One. In terms of storage size, users will need between 44.6GB to 53.6GB of free on the PS4 to install the game while on the Xbox One, they’ll need 52.1GB of free space to install Call of Duty: Infinite Warfare. A day one patch to fix stability issues is out as well, weighing in at roughly 6GB. Though there were no perceptible changes on the PS4 version we played.
In our review of the game, we found the single-player campaign to be “entertaining enough to keep well worn gameplay mechanics from getting stale,” while we found that the multiplayer component of the game and its monetisation model to be glaring points of concern.

If you purchase the Legacy, Legacy Pro or Digital Deluxe Edition you will also receive a copy of remastered version of Call of Duty: Modern Warfare.
“We began three years ago with the goal to push ourselves in an all-new direction and take players to places they’ve never been before. In Infinite Warfare, we’re telling a classic war story of good vs. evil, and adding an epic backdrop that lets us introduce a ton of innovative gameplay,” Studio Head of game’s developer Infinity Ward Dave Stohl was quoted as saying in company’s release.
Call of Duty: Infinite Warfare might prove to be one of the most crucial entries for the game series in recent times, as the Activision franchise has been facing serious competition from Battlefield One, the latest instalment of the rival game franchise from EA. The war, in figurative terms, between the latest entries from both franchises started right from the time when gameplay trailers for both games came out. The Infinite Warfare trailer received highly negative feedback from fans as it was downvoted in huge numbers on YouTube.

Contrastingly, Battlefield One created a positive buzz for its gameplay and was upvoted in large numbers. As the two franchises have been facing-off against each other for a long time, comparisons were drawn almost immediately. However, the game should not be discarded as we have earlier pointed out that single-player campaign shows promise with space combat, elements of exploration, and some interesting set-pieces.

“Infinite Warfare is hands-down the best story campaign we’ve had in years and is a leap forward in the fluid, fast-paced action that Call of Duty fans know and love,” CEO of Activision Eric Hirshberg was quoted as saying in company’s release.

Call of Duty: Infinite Warfare game has been available for pre-order in India since September and can be bought from websites like Amazon and Flipkart as well.

You can check out the PC system requirements for Call of Duty: Infinite Warfare over here.

that is the primary time that this convention may be hosted by using a Southeastern U.S. metropolis. To honor this event, Grovewood Gallery has invited a number of global–renowned calligraphers, such asseveral Asheville area calligraphers, to participate in a unique showing in their works, in an effort to be on display in the gallery June 25-July 24. a gap reception could be 2-6 p.m. June 25, and visitors canexperience mild refreshments and calligraphy demonstrations by means of some of the featured artists (unfastened and open to the public).

A show of fingers 2016 Calligraphy Exhibition is curated by means of Jessica Yee, former president andpresent day board member of the Triangle Calligraphers Guild. Yee has been a calligrapher for extra than 25 years and was the showcase coordinator for the Carolina Lettering Arts Society’s annual preferred meetingin Cary. She has run her personal calligraphy commercial enterprise, The indirect Pen, for the final six years.

“Lettering artists have usually expressed the that means of words in a visual way. Bringing word andimage together has a long history in conversation, but present day calligraphers discover this preceptwith the aid of the usage of word as image in new and specific methods,” said Annie Cicale, co-director of A show of fingers 2016. “on this showcase you’ll see artists who explore an expansion of media todiscover the brand new possibilities, unencumbered by means of the limitations of typography.”

The thirty fifth international calligraphy conference, A display of hands 2016, alludes to the arms-on craftsmanship that makes the artwork of calligraphy so unique. those meetings carry together an globalcollection of best teachers and providers to the trade. most significantly, they’re open to people of each talent degree, from amateur to master, who have a passion for the lettering arts. in the course ofthis yr’s convention, each classical and present day calligraphy training could be performed for morethan three hundred registered guests, tutored with the aid of 26 college members from round the arena. To learn extra about A show of fingers 2016, or to check in for the convention, go towww.ashowofhands2016.com.

For greater records at the gallery or its upcoming activities and exhibitions, head to grovewood.com.

Grant Manser created the damaging software from his bedroom and sold it on the ‘dark web’ to customers around the globe for as little as £4.99, a court heard.

The then 16-year-old’s “stresser” program worked by bombarding websites, servers and email addresses with so much information they crashed.

Among the victims were companies, schools, colleges and government departments,the Birmingham Mail reported .

But he was spared jail after the judge accepted that he only did it for financial gain and was “young and naive”.

Raj Punia, prosecuting, said the defendant was arrested at the family home in November 2014 by officers from the Regional Cyber Crime Unit and computer equipment seized.

It was found to contain four systems called Dejabooter, Vexstresser, netspoof and Refinedstresser, known in the computer world as DOS – “denial of service” software.

When deployed these DOS programs flooded a chosen website, server or email address with so much data they could not cope, causing them to temporarily crash.

Manser sold the software via the ‘dark web’ – the hidden internet only used for criminal purposes – at prices ranging from £4.99 to £20.

One UK victim was Harrogate and Hull College which saw its entire computer network crash for 14 hours after a disgruntled student brought one of Manser’s packages because he was unhappy at being kept behind for detention.

Read more : Hungry hacker tricks Domino’s into delivering him FREE PIZZA – and a dessert too

Miss Punia said Manser accepted payment by PayPal and had a turnover of £50,000 during the period he was operating.

She said although it was widely acknowledged that “stresser” programs could be used legitimately by companies to test their own vulnerability, in this case Manser’s software was “only designed for illegal criminal purposes”.

By the time he was arrested, Manser’s business was doing so well he had started to advertise for staff.

During police interviews, the teenager said he had got the idea after working for someone in the United States and seeing how much money he made from the scheme.

Among the victims his customers targeted were companies, councils and government departments across the world, including Poland, France, other EU countries, the United States and the Netherlands.

Jamie Baxter, defending, said his client only designed and sold the systems to make money. “He is not a hacker, the system doesn’t take or hack any information from the websites being attacked,” he said.

And he said he had built safeguards into the program to ensure that organisations on a “blacklist” were not attacked. These included banks, any healthcare organisation, the police and the FBI.

“He was only 16 when he started to do this and it was his immaturity and naivety which led him to commit these offences,” Mr Baxter said.

His client had not spent the £50,000 extravagantly, but on updating his computer equipment and also on his hobby of his motorbike. China has the highest adoption rate in the world for technology-enabled payment systems, the media reported on Thursday.

In a survey of 13,000 respondents in 26 countries, 86 percent of Chinese respondents said they paid for online purchases during the past six months via digital payment systems compared with a global average of just 43 percent, the China Daily reported.

About 98 percent of the respondents in China, the world’s largest e-commerce market, said they had made purchases online.

At 71 percent, food-related businesses topped the list of purchases made via smartphones while event ticket purchases stood at 51 percent.

The rising use of digital payments has attracted numerous players to the Chinese market.

Apple Inc launched its contactless payment system Apple Pay in the Chinese mainland last month. It allows users of the iPhone 6 or more advanced versions, certain iPads and Apple Watches to pay by their devices in bricks-and-mortar stores.

Samsung Electronics Co Ltd is expected to bring its own mobile payment service to China in mid-March.

China’s Internet giants Alibaba Group Holding Ltd and Tencent Holdings Ltd have already taken about 90 percent of the mobile payment market, but industry observers said the competition is just about to start.